How To Tell Someone You Have ADHD 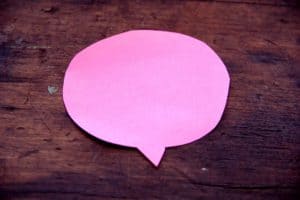 When you are first diagnosed with ADHD, there are some
people in your life you will share the news with without a second thought. These are the people in your inner circle – perhaps your wife or husband, parents, kids or very close friends.

There are also some people you will probably never tell. These are people who are negative, closed minded, mean spirited, or have said negative things about ADHD in the past.

Then there are people who aren’t in either of these groups. You are close, but they aren’t in your inner circle, or you might not have known them when you were diagnosed.

It feels strange they don’t know this important detail about you. Yet you aren’t sure the best way to tell them.

What is the best way to tell them?

First, remember you don’t have to tell anyone you have ADHD. In fact in some cases, it’s best if you don’t tell. Click here to read an article called ‘Should you tell people you have ADHD?’

Before telling someone you have ADHD, ask yourself, ‘Why do I want this person to know I have ADHD?’

Perhaps it is because you are dating them and it feels important that they know. Or it would help a friendship if your friend knew you had ADHD. Not to excuse your behaviour, but to give a deeper insight into who you are. Or perhaps you are having a hard time making sense of ADHD and they are the type of friend with whom you share important things.

Taking a minute to think, ‘Why do I want them to know?’ is a helpful habit as it reduces the chance of you impulsively telling someone and regretting it later.

Never tell someone because you feel obligated. You aren’t.

Often ADHDers feel nervous before telling someone, and have a big run up: ‘Could you sit down? I have something important to tell you…’ This can make your friend nervous and worried. They think you are breaking up with them or have a life threatening disease.

Or you might do the opposite and blurt out, ‘I have ADHD.’

There is nothing wrong with either of those approaches if you have done that! However, it can make the follow up conversation a little strained as they process the new information.

An alternative approach is to ease into the topic of ADHD.

For example, ‘What do you know about ADHD?’ or

‘How much do you know about ADHD?’

Then listen carefully to their reply.

Asking this type of question will let you know two things: their attitude towards ADHD and their factual knowledge about the condition.

Attitude is everything! As your friend is replying to your question, you will quickly get a sense of if they are anti-ADHD or open-minded, compassionate or neutral.

There are still a lot of people who don’t believe ADHD exists, or that people use it as an excuse for being lazy. (I know!) Some people go on an angry rant; for example, ‘The drug companies invented it to sell more products.’

Once you know the person’s attitude towards ADHD, you can decide if you want to continue to tell them you have ADHD. It’s okay to change your mind if their attitude isn’t positive.

There are still lots of misconceptions about ADHD. For example, some people think only children have it and that adults don’t. Others know about hyperactive ADHD and not inattentive ADHD.

Some people know a person with ADHD, and think that is how ADHD shows up for everyone.

When you know your friend’s knowledge base, you can fill in the blanks and explain how ADHD affects you. Even if they are really knowledgeable about ADHD, they won’t know how it affects you.

Talking about ADHD like this is less stressful for both of you. They aren’t put on the spot, and it can open up a thoughtful conversation. Plus, it sets the tone for future conversations you two can have about ADHD.

Why does it feel hard to tell people I have ADHD?

Having ADHD is nothing to be ashamed of. However, many people worry about telling someone they have ADHD. If an important-to-you person is rude or dismissive about ADHD, it feels like they are also dismissing or rejecting you because ADHD is such an integral part of who you are.

‘I am dating. When is the best time to tell my date I have ADHD?’

There isn’t a perfect time to tell your date. Some ADHDers share their diagnosis on the first date. Their reasoning is, if the person is anti-ADHD there’s no point having a second date.

Other people prefer to wait and let the relationship progress naturally. That way their date can fall in love with all aspects of them, including their ADHD traits.

How do you tell people you have ADHD?