Susy felt a shot of dread every time the doorbell rang. Luckily she had 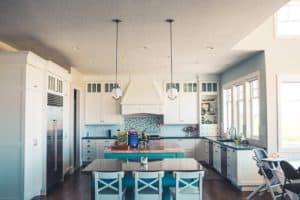 mastered the technique of opening her front door just enough for the visitor to see her head, but not enough that they could see into her home.

When she said goodbye and closed the front door, Susy always felt a mixture of shame and relief.

Shame because her home was very messy.

Relief because the potential disaster of another human seeing her cluttered home had been avoided.

As Susy’s eyes scanned her kitchen she wondered how she could have two degrees and hold a responsible job but not be able to keep her countertops clean.

Something so simple for other people felt like rocket science to her.

Dishes with dinner leftovers, tins of cat food, half full coffee mugs and containers waiting to be recycled covered every flat surface.

It was a similar story in her other rooms. Papers, bills, receipts, shopping bags, books and clothes were in piles on the floor, on tables and even on the half of the bed she didn’t sleep on.

In extreme circumstances, like an out of town visitor, Susy found she had the motivation and focus to declutter. But when the visitors left, the clutter returned.

Even a simple thing like reaching into a cupboard was a big deal. Items were so tightly packed, if one thing was moved, an avalanche of clutter would fall out. When this happened she felt really grumpy.

The clutter also made Susy feel mentally disorganized. If she needed to find something important, perhaps for work or her taxes, she felt anxious because she didn’t know where it would be.

Susy was lonely. The clutter meant she felt different from everyone else and it stopped her spending time with her friends.

Susy didn’t feel she could do fun activities or move forward with her goals until her home was tidy. However, when the weekend rolled round and she had time to declutter, her energy drained at the thought of it. Instead she would nap or  procrastinate by watching YouTube videos.

Her life was on hold until she decluttered but as the months slipped by she felt stuck.

Keeping a tidy, clean home is a challenge when you have ADHD. After all, it is a boring, mundane task, with no finish line – everything that ADHDers find tough. However, there are things you can do to master the clutter and feel organized.

There is a brand you course called ‘Clear and Calm‘

In it you will learn how to…

There are also “Virtual Body Double Hours!” so that taking action is easier.

In the ADHD world, a ‘body double’ is a person who sits with you while you work on a task like decluttering, A body double helps keep you focused on task. In Clear and Calm, we have Virtual Body Double Hours. We all hop on a call together and work on our most important tasks. The collective energy of the group helps beat procrastination and promotes focus. Plus, if you get stuck or feel resistance, I am there to help you more forward.

The 6 Week Live Group round of Clear and Calm Starts September 5th! starts soon Hope you can join us!