In it, author Mason Currey shares the rituals of 161 creative people.

The novelists, composers, painters, philosophers, scientists, and mathematicians all had/have rituals in their lives that allow them to do their creative work.

In ‘Daily Rituals’, we get to learn what those rituals are as we peek into the creative lives of

to name just a few. 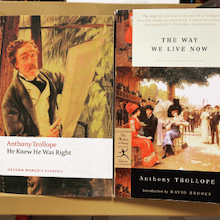 Anthony Trollope was a Victorian author and was thought to be one of the most prolific authors of all time.

He wrote 47 novels, 42 short stories, and five travel books, and some non- fiction books too.

How did he do that?

Each morning his goal was to write 3000 words before going off to his day job at the Post Office.

He broke that big goal of 3,000 words into smaller chunks.

He did all this before the invention of fancy timers and computers with a ‘word count’ feature.

Setting goals and breaking big goals into smaller ones is helpful for ADHDers.

A small goal feels easier to start because it stops you from feeling overwhelmed.

Also you maximize the benefits of dopamine.

Dopamine is a neurotransmitter and the ADHD brain has less of it than the non ADHD brain. Which results in classic ADHD challenges including focusing and concentrating.

There are ways to increase dopamine with ADHD meds and natural ways, such as the things we cover at Untapped Brilliance, including taking an omega 3 supplement, exercising, and meditation.

You can also increase dopamine by getting things done!

When you set yourself a goal and achieve it, you get a shot of dopamine which makes you feel good. Because we like to feel good, we are motivated to achieve something else.

It just rewards you for accomplishing something you set out to do.

You can use this to your advantage and set small achievable goals every day.

For example, Anthony Trollope would have received a shot of dopamine every 15 minutes as he was writing and hitting his word count.

What daily goals could you set for yourself?

How can you break them down into smaller ones?

One last thing: pick the right difficulty level for your small goals. If they are too easy, you won’t rise to the challenge and get that satisfied feeling afterwards.

Also if they are too hard, you might feel demotivated before you even start…which means you will get less done not more!

250 words every 15 minute for 3 hours, was probably a slight stretch for Anothoy Trollope, while still being do-able.

Test it out for yourself!