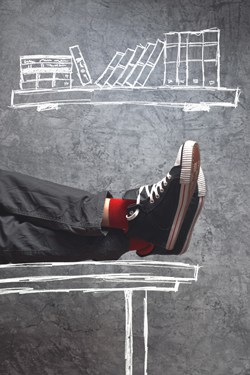 While it is not a new idea, breaking big projects or tasks into small, manageable chunks is a great way to beat procrastination and get things done. Evidence that this idea has been around for hundreds of years I the Chinese proverb that states “A journey of 1,000 miles starts with just one step.” A seemingly impossible journey that appears overwhelming at first can be broken down into simple stages and completed. After all, you know how to take a single step, then after that you take another. Take enough single steps and you are there! Mission accomplished. When you think of a task like this, then you can do ANYTHING. It’s a very empowering thought. A modern saying in the same vein is “How do you eat an elephant? One bite at a time.”

When I was little I wasn’t a good eater. I would look at a plate of food and not know where to start, so I would barely touch any of the food on my plate. My mum realized this and would put a small portion on a side plate, which I would be able to eat and then she would put another small portion on the side plate and I would eat that too.

When something seems so big it seems impossible, just focus on a small part you are working on. Don’t start thinking about everything you still have to do because that will make you feel overwhelmed and  you will freeze (which has the same outcome as procrastination).

So the next time  you are faced with procrastination and resistance to starting a project, follow these steps:

As always, celebrate your success of a job well done!