ADHD and Comparing Your Organizing Skills to Others

Have you noticed that some people seem to be born organized? 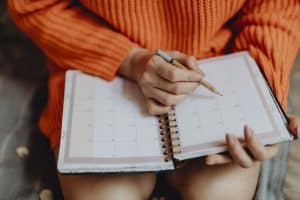 I had a friend like that in high school. Lisa’s homework and school books were neatly labelled and colour coded.

As soon as she was assigned homework, she had a system to document it.

Her handwriting was the perfect combination of neat, stylish and easy to read.

She was punctual, her school uniform was crisp and nothing out of place and so much more.

Her mum was a ‘regular person’ type of organized, as was their house, but Lisa’s bedroom was out of this world organized. This was pre internet and Pinterest, so Lisa thought of all this herself.

Not in an extreme way, though, that might suggest OCD. Lisa was just a high school student who happened to be very organized naturally.

Fast forward several decades and I haven’t met another Lisa. I meet a lot of people so I suspect her level of innate organization is rare.

What is perhaps more normal is that people learn how to be organized. They develop systems and habits based on experience, watching others and with the help of books like Stephen Covey’s ‘7 Habits of Highly Effective People’ and Marie Kondo’s, ‘The Life-Changing Magic of Tidying Up.’

Being organized is something that many people living with ADHD strive for. They are on a constant mission to ‘become more organized.’ In fact, that was the topic of the workshop I hosted last week called ‘Heads Up! How to organize your head and feel in control of your life… the ADHD friendly way.’

Being organized has many benefits. It helps with productivity and gives a sense of inner calmness. It means you don’t have to worry about forgetting important things, etc. It’s a good goal.

However!! Don’t assume everyone else in the world is really organized and you aren’t.

No one is that good and that organized (except the Lisa’s of this world).

And you aren’t as disorganized as you think.

My friend Richard who has ADHD shared a story recently.

He noticed a colleague was carrying around a manila folder with paperwork in it.

Richard’s automatic thought was, ‘That guy is very organized,’ and then the story expanded in his mind. He pictured his colleague filing all his paper work in cream manila folders and storing them in perfectly labelled hanging folders in filing cabinets, in his well-ordered, tidy office.

One day, Richard mentioned to his colleague how organized he was. The colleague seemed surprised.

‘Oh sure, I am using one manila folder, but I don’t use manila folders for everything. Most of my papers are scattered around my desk, and I have to hunt around for them when I need them. I thought you were the organized one because you are always taking notes.’

It’s true. Richard takes notes in meetings because it helps his ADHD brain to stay focused on what is being said. He hadn’t realized it made him look organized to other people!

There’s a smaller gap than you think

It’s very easy to compare your insides to other people’s outside appearance. It’s also easy to make inferences about other people based on a couple of facts.

Richard’s example shows that there is a much smaller gap between your organization and other people’s.

The good news is that even if you don’t feel that organized at the moment, it doesn’t mean you have to give your whole life a complete organization overhaul. Even a few small tweaks can make a big difference.

Also, you are probably more organized than you are giving yourself credit for.

Here are a few suggestions to help you look and feel more organized!

What do you currently do that helps you look and feel organized?

If someone watched you live your life, what would impress them? There will be something.

Start to notice what impresses you about other people’s organization skills.

How could you incorporate that into your life?

3. What would make the biggest difference?

What would be the ONE thing that would help you feel more organized? Focus on making that an effortless habit. Even something small can make a big difference.