Sally felt really proud of herself.  For years she felt like her house was looking like a 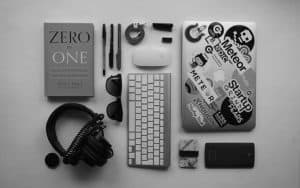 Her floors  had abandoned clothes and half empty boxes from her last move, which was 3 years ago. She was so embarrassed that she never invited friends over.

Then one evening, Sally got frustrated because she couldn’t find a spoon to cook her stir fry. So, she decluttered her spoon drawer.  It felt so good to  have a tidy drawer that over the next year Sally  decluttered and tidied every drawer, shelf, counter top and floor space.

Now when Sally opens a cupboard,  each item is arranged neatly. It is easy to find things, and Sally feels calm, focused and happy.

At first Sally was thrilled to be able to invite friends over. But then she started to get confused because  friends would say things like,

and Sally started to question if she had ADHD after all.

Sally’s friends’ reaction is common for people who only know a little about ADHD.  People image that someone with ADHD would have a cluttered disorganized home, (like the old Sally) while someone with OCD lives in an organized place.

The problem with comments like these is that ADHDers start to question their diagnosis…just like Sally did.

If you are a little confused about the difference between OCD and ADHD, here are some facts.

Obsessive-compulsive disorder (OCD) is an anxiety disorder that results in obsessive thoughts and compulsive behaviors. These thoughts and behaviors are experienced to such an extent that they get in the way of daily living.

People with OCD often belong to one of these groups:

Checkers continually check things associated with possible danger. They check to see if the door is locked or if the stove is switched off.

Hoarders and collectors keep unnecessary items. They don’t throw things away because they fear something bad will happen if they do.

Washers are fearful of contamination. They have obsessions with cleaning or hand-washing.

Counters, arrangers and orderers need symmetry and exactness. They might perform rituals, count obsessively or seem superstitious about certain numbers and colors.

Sinners fear that if everything isn’t just so, they will be punished.

People with OCD often have ‘magical thinking’. They think if everything is perfect, nothing bad will happen. They perform their ritual; it offers a moment of mental peace before the obsessive thoughts start again.

ADHDers might act in a way that, on the surface, looks like OCD. However, they have developed these behaviors to help themselves to function in the world, instead of the constant obsessive thoughts that drive a person with OCD.

Here are some examples.

Before leaving their home, a person with ADHD might run around checking that all windows and doors are shut and locked before they leave. Habits like these aid poor memory (which ADHDers are prone to) and have been developed to avoid any unpleasant surprises.

In contrast, someone with OCD is probably already certain that everything is secure but are checking to satisfy an obsessive urge.

ADHDers who create and maintain an organized environment enjoy the sense of emotional peace that a clear space gives them.  They feel more focused, less scattered. It’s a way for them to control the negative effects of ADHD rather than an obsession.

ADHDers often have a lot of clutter; but rather than being hoarders, it’s because decluttering is boring and involves attention to detail to keep clutter at bay.

Similarities of ADHD and OCD

Both ADHD and OCD are highly genetic and result in reduced attention, poor memory and impulse control.

One difference between ADHD and OCD is chemical. ADHD is in part due to low dopamine levels in the brain and OCD is due in part to low serotonin in the brain.

ADHD and OCD are very different, and  people can have both ADHD and OCD. In fact, if you have ADHD, you have a higher chance of also having OCD than someone without ADHD.

However, if you  have either OCD or ADHD or both: Don’t panic! Both can be treated and managed.