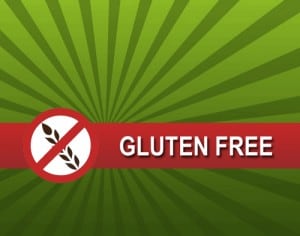 ADHDers have a higher rate of food allergies and food intolerance than people who do not have ADHD.

Do you know which food sensitivity is most frequently connected with ADHD? Gluten.

In fact, some researchers believe 70-80 percent of ADDers have a gluten sensitivity.

Gluten is a protein substance found in most grains, (wheat, barley, rye) and food processed from those grains, such as, cereals, breads, processed and packaged foods. These products play a big part a standard western diet.

How do you find out if you are gluten sensitive?

It is possible to ask your doctor to test you,  tests are expensive and not always reliable (with a lot of false negatives). Also, the result can also be misleading. For example, the results might say your sensitivity is ‘mild’, but don’t let that trick you. What is mild on the medical spectrum may not be mild for you; which could mean a huge difference in how you function and operate.

I went gluten-free on the 1st of November 2012. I was motivated because I had a longstanding knee injury that was stopping me from running. I had tried all the traditional things, physiotherapy etc. and nothing seemed to work. When I heard that a gluten-free diet helps sports injuries because it reduces inflammation in the body, I decided to try it as an experiment. It worked! In the spring of 2013, I started running again. In June 2013, I did a 12K Spartan race where you run through a crazy obstacle course and get covered in mud. In September, I did my first ever half marathon in 2 hours. I was super proud and none of this would have been possible if I was still eating gluten.

What does this have to do with ADHD? Well, back in November 2012, in less than a week, I noticed a huge difference in my clarity of thought. My brain felt sharper and I felt happier (even though I hadn’t been feeling sad), and so I knew I would never go back to eating gluten.

Not wanting to keep good things to myself, I started suggesting to clients that experiment with a gluten-free diet. They experienced incredible results too. Everyone experienced different benefits. However, the common ones were: their brains felt sharper, being better able to focus; less hyperactive, a sense of calm, zero brain fog, with no more afternoon slumps.

The other benefit was that those that had excess weight to lose, lost it effortlessly.

Changing the way you eat does involve a bit of discipline and creativity as you overhaul a lifetime of food habits.

However, researchers found that everyone who has gluten sensitivity that gave up gluten, noticed improvement with their ADHD symptoms. That is an astounding result! Researchers barely ever say everyone!

Your challenge this week, is to give up gluten! It’s a big challenge, I know! But I promise you it will be worth it. Let me know how you get on!

Niederhofer, H., and K. Pittschierler 2006. A Preliminary investigation of ADHD symptoms in person with celian disease. Jounal of Attention disorders 10(2): 200-2004.

Have you ever gone gluten free? I would love to hear your experience. Drop me a note in the comments section!